When I moved to York's South Bank a decade or so ago, I liked the blueish decorative bricks that lined the back alleys. Only recently, thanks to the ever-enjoyable and informative York Stories blog, did I discover how unusual these bricks were.

Apparently, they are rosemary setts, or stable paviours, or stable pavers, or slag paviours. They were made by the Tees Scoriae Brick Company, using a patent developed by Joseph Woodward to turn molten blast furnace slag into bricks. Appropriately, they were made in South Bank, Teesside.

Geologically, scoria is 'an extremely vesicular basaltic lava'. The Greek word skoria means rust or slag, so Woodward and his friends were hellenizing slag to make their company sound a bit more sophisticated. And why not? The ingenuity of turning waste material into building materials was sophisticated!

Geologically, it's also interesting that the Tees Scoriae Brick Company was essentially making its own igneous rocks. An 1890 paper by Gilbert Redgrave on the utilization of slag compares the bricks to basalt, and notes that casting two bricks together, before splitting them with a hammer, created a 'cleavage' that coped much better with heavy traffic than a smooth, moulded surface.

The density of the bricks made them very hard-wearing, as did the composition. Mark Warman, in a comment on the York Stories blog, said that microscopic examination of a sectioned sett showed it contained melilite ('honey stone') minerals, first found near Rome in the late 18th Century. Melilites are a group of calcium silicate minerals, naturally found in metamorphic and volcanic rocks, and meteorites. However, there are many synthetic forms, and clearly the furnace slag brickworks of Cleveland were a good artificial habitat.

Lava-tough, honey-infused, rosemary setts: perfect for gritty northern streets. Don't think about using them as house-bricks, though. A study by Michele Dondi and colleagues in 2004 showed that bricks rich in calcium silicates, such as melilite, are thermally conductive, so don't offer good insulation.

Hopefully the good folks at Darwen Terracotta knew this when making the scoria-inspired tiles for York Art Gallery's Centre of Ceramic Art... 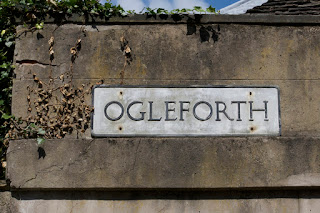 The York Insider: Reclaim the names!

I love old names, and the streets of York have some crackers.  Meandering round the back lanes, who could fail to be amused by Ogleforth or bemused by Jubbergate ? Not an instruction, sadly, but a corruption of Ugel's or Owl's Ford It's a pity then, that so many others have fallen by the wayside, and been replaced by much blander epithets.  Some changes, such as deprostituting Gropecunt Lane into the more widely acceptable Grape Lane, were perhaps understandable.  Others though were sanitized for no good reason. I'm not sure who was responsible - for simplicity I'm going to blame the Victorians - but a delve into local history (such as the excellent Snickelways of York ) reveals many examples*.  Blossom Street was once Ploxwangate, or the ploughswain's road.  Ignorance is bliss, though, I suppose, and if you never knew of the formers, I suspect you wouldn't think much about the latters. What I do find strange is where the arbiters of road-sign